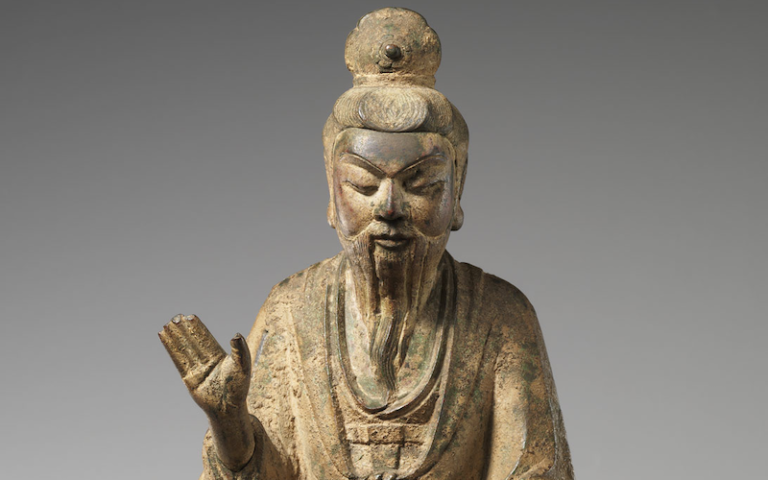 The journey of a thousand miles starts from beneath your feet.

Let there be a small country with few people… Though neighboring communities overlook one another and the crowing of cocks and barking of dogs can be heard, Yet the people there may grow old and die without ever visiting one another.

Don’t think you can attain total awareness and whole enlightenment without proper discipline and practice. This is egomania. Appropriate rituals channel your emotions and life energy toward the light. Without the discipline to practice them, you will tumble constantly backward into darkness.

Darkness within darkness. The gateway to all understanding.

Of the best rulers, The people only know that they exist; the next best they love and praise the next they fear; and the next they revile. When they do not command the people’s faith, some will lose faith in them, and then they resort to oaths! But of the best when their task is accomplished, their work done, the people all remark, We have done it ourselves.

A tree trunk the size of a man grows from a blade as thin as a hair. A tower nine stories high is built from a small heap of earth.

The sage does not hoard. Having bestowed all he has on others, he has yet more; having given all he has to others, he is richer still.

See simplicity in the complicated. Achieve greatness in little things.

Nothing in the world is more flexible and yielding than water. Yet when it attacks the firm and the strong, none can withstand it, because they have no way to change it. So the flexible overcome the adamant, the yielding overcome the forceful. Everyone knows this, but no one can do it.

Water flows humbly to the lowest level. Nothing is weaker than water, Yet for overcoming what is hard and strong, Nothing surpasses it.

He who knows he has enough is rich.

Empty your mind of all thoughts.

The net of heaven is very wide in its meshes, and yet it misses nothing.

The Way (Dao) that can be described with words is not the eternal Way.

Virtue in its grandest aspect is neither more nor less than following reason.

The more we give to others, the more are we increased.

Love the whole world as if it were your self; then you will truly care for all things.

Seek not happiness too greedily, and be not fearful of happiness.

A journey of a thousand miles begins with a single step.

He who loves the world as his body may be entrusted with the empire.

People are difficult to govern because they have too much knowledge.

The best [man] is like water. Water is good; it benefits all things and does not compete with them. It dwells in [lowly] places that all disdain. This is why it is so near to Tao.

The Way of Heaven is to benefit others and not to injure. The Way of the sage is to act but not to compete.

To be worn out is to be renewed.

To have little is to possess. To have plenty is to be perplexed.

To produce things and to rear them, To produce, but not to take possession of them, To act, but not to rely on one’s own ability, To lead them, but not to master them – This is called profound and secret virtue.

When armies are mobilized and issues are joined, The man who is sorry over the fact will win.

The greater the number of laws and enactments, the more thieves and robbers there will be.

The Tao [Way] that can be told of is not the eternal Tao.

One may know the world without going out of doors. One may see the Way of Heaven without looking through windows. The further one goes, the less one knows.

The more laws and orders are made prominent, The more thieves and bandits there will be.

The journey of a thousand li starts from where one stands.

Heaven’s net is indeed vast. Though its meshes are wide, it misses nothing.

He who stands on tiptoe does not stand firm.

Stretch a bow to the very full, And you will wish you had stopped in time.

He who accounts all things easy will have many difficulties.

The slaying of multitudes should be mourned with sorrow. A victory should be celebrated with the funeral rite.

When the best leader’s work is done the people say, “We did it ourselves.

As soon as you have made a thought, laugh at it.

Govern a great nation as you would cook a small fish. (Don’t overdo it.)

Life is a series of natural and spontaneous changes. Don’t resist them – that only creates sorrow. Let reality be reality. Let things flow naturally forward in whatever way they like.

If you do not change direction, you may end up where you are heading.

To the mind that is still, the whole universe surrenders.

A leader is best when people barely know he exists, when his work is done, his aim fulfilled, they will say: we did it ourselves.

The journey of a thousand miles begins with one step.

When you are content to be simply yourself and don’t compare or compete, everybody will respect you.

I have just three things to teach: simplicity, patience, compassion. These three are your greatest treasures.

A good traveler has no fixed plans, and is not intent on arriving.

Knowing others is wisdom, knowing yourself is Enlightenment.

Music in the soul can be heard by the universe.

In dwelling, live close to the ground. In thinking, keep to the simple. In conflict, be fair and generous. In governing, don’t try to control. In work, do what you enjoy. In family life, be completely present.

Nature is not human hearted.

The snow goose need not bathe to make itself white. Neither need you do anything but be yourself.

Mastering others is strength. Mastering yourself is true power.

The key to growth is the introduction of higher dimensions of consciousness into our awareness.

Love is of all passions the strongest, for it attacks simultaneously the head, the heart and the senses.

Life and death are one thread, the same line viewed from different sides.

Anticipate the difficult by managing the easy.

Be content with what you have; rejoice in the way things are. When you realize there is nothing lacking, the whole world belongs to you.

If the Great Way perishes there will morality and duty. When cleverness and knowledge arise great lies will flourish. When relatives fall out with one another there will be filial duty and love. When states are in confusion there will be faithful servants.

At the center of your being you have the answer; you know who you are and you know what you want.

By letting it go it all gets done. The world is won by those who let it go. But when you try and try. The world is beyond the winning.

Be the chief but never the lord.

Nothing is softer or more flexible than water, yet nothing can resist it.

When the best leader’s work is done the people say, ‘We did it ourselves.’

Man’s enemies are not demons, but human beings like himself.

The words of truth are always paradoxical.

Fill your bowl to the brim and it will spill. Keep sharpening your knife and it will blunt.

For the wise man looks into space and he knows there is no limited dimensions.

Without stirring abroad, One can know the whole world; Without looking out of the window One can see the way of heaven. The further one goes The less one knows.

People in their handlings of affairs often fail when they are about to succeed. If one remains as careful at the end as he was at the beginning, there will be no failure.

The career of a sage is of two kinds: He is either honored by all in the world, Like a flower waving its head, Or else he disappears into the silent forest.

Ambition has one heel nailed in well, though she stretch her fingers to touch the heavens.

One who is too insistent on his own views, finds few to agree with him.

It is better to do one’s own duty, however defective it may be, than to follow the duty of another, however well one may perform it. He who does his duty as his own nature reveals it, never sins.

The higher the sun ariseth, the less shadow doth he cast; even so the greater is the goodness, the less doth it covet praise; yet cannot avoid its rewards in honours.

The power of intuitive understanding will protect you from harm until the end of your days.

When a nation is filled with strife, then do patriots flourish.

He who controls others may be powerful, but he who has mastered himself is mightier still.

If you would take, you must first give, this is the beginning of intelligence.

In the world there is nothing more submissive and weak than water. Yet for attacking that which is hard and strong nothing can surpass it.

Govern a great nation as you would cook a small fish. Do not overdo it.

To see things in the seed, that is genius.

Governing a great nation is like cooking a small fish – too much handling will spoil it.

The wise man does not lay up his own treasures. The more he gives to others, the more he has for his own.

Great acts are made up of small deeds.

He who is contented is rich.

One can not reflect in streaming water. Only those who know internal peace can give it to others.

An ant on the move does more than a dozing ox.

The people are hungry: It is because those in authority eat up too much in taxes.

The more laws and order are made prominent, the more thieves and robbers there will be.

Violence, even well intentioned, always rebounds upon oneself.

From wonder into wonder existence opens.

I do not concern myself with gods and spirits either good or evil nor do I serve any.

A scholar who cherishes the love of comfort is not fit to be deemed a scholar.

He who talks more is sooner exhausted.

He who obtains has little. He who scatters has much.

To lead people walk behind them.

He who knows himself is enlightened.

Great indeed is the sublimity of the Creative, to which all beings owe their beginning and which permeates all heaven.

How could man rejoice in victory and delight in the slaughter of men?

Being deeply loved by someone gives you strength, while loving someone deeply gives you courage.

Silence is a source of great strength.

When I let go of what I am, I become what I might be.

Nature does not hurry, yet everything is accomplished.

Respond intelligently even to unintelligent treatment.

He who does not trust enough, Will not be trusted.

He who knows that enough is enough will always have enough.

Because of a great love, one is courageous.